Rail Freight Corridor Orient / East-Med (RFC OEM, formerly also RFC 7) is a virtual transport corridor, which has been established with the aim to facilitate international rail freight. Infrastructure managers and authorities from eight Central- and Southeast-European countries have teamed up to create better technical and business conditions for using their rail networks. The users - railway undertakings - can thereby make better offers for shippers, and the rail sector increases its attractiveness.

Its virtual nature comes from not being bound to physical rail infrastructure, but connecting important European nodes flexibely via rail routes which offer the best performance for international freight. Performance improvement is sought in particular on the fields of capacity allocation, traffic and contingency management, as well as via deregulation. Infrastructure development is not included in its competences, this distinguishes it from the Orient/East-Med Core Network Corridor, which is coordinating the investment projects of the Member States.

The concept of rail freight corridors has been created by a European legislative act, Regulation (EU) 913/2010. It has set out a series of measures for improving conditions for international rail freight, but perhaps even more importantly, it has created a platform for incubating new initiatives and cooperation between the railways.

The Regulation has set up nine rail freight corridors itself, and two further have joined on the initiative from the Member States. The eleven rail freight corridors are coordinating their measures, and are cooperating in order to form a network. They rely on IT- and other services provided by RailNetEurope, an association of European infrastructure managers.

Out of the eleven rail freight corridors, RFC OEM is running through the highest number of participating Member States and infrastructure managers (eight). It has also the largest network, currently stretching to just over 9 300 kms (with primary, alternative and diversionary routes included).

The exact route is displayed on the below map. 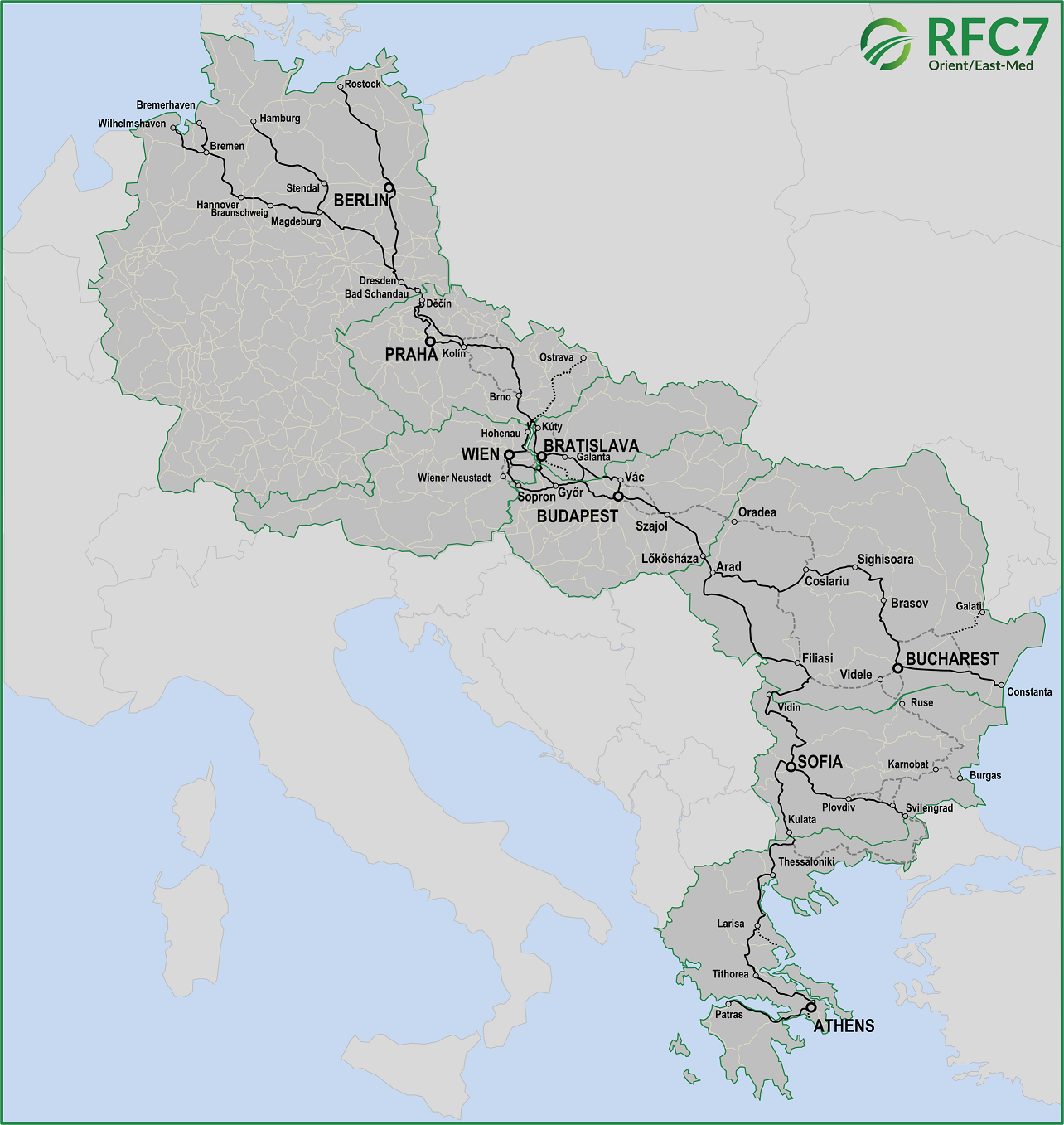 The large network leads to having heterogenous infrastructure capabilities and parameters, but there's one objective which is linking the infrastructure managers: customer-oriented attitude is the most important key element of the progress. RFC OEM believes that international rail freight has a large potential for international rail freight business on the long term.

Over the last decades, Rail Freight Corridor Orient / East-Med was preceded by a series of transport corridors defined between Central and Southeastern Europe, such as

The direct predecessor to RFC OEM was ERTMS Corridor E which ran from Dresden to Constanța. It was founded in 2007, and its objective was the deployment of the European Rail Traffic Management System (ERTMS) along its route. RFC OEM has kept the implementation of ERTMS in its focus, but this objective has been complemented by a series of other technical and administrational objectives, which aim to facilitate international rail freight.

2008 – The European Commission examined the potential means to facilitate international rail freight. Outcome of the analysis resulted in a legislative proposal, which subsequently underwent an ordinary legislative procedure.

2010 – Regulation (EU) 913 / 2010 was adopted by the EU. This legislative act required the establishment of RFC OEM, and set out its main characteristics.

2011 – Member States and infrastructure managers created the organisational scheme of RFC OEM, Executive Board and Management Board were established, each by signing a Memorandum of understanding.

2013 – RFC OEM went into operation on 13 November. On the same day, the first request for a train path was received by the Corridor One-stop-shop.

2016 – Ministers signed a political declaration on the development of RFC OEM. Its objectives had been selected on the basis of initiatives by the European coordinator of Core Network Corridor Orient.

2018 – In cooperation with the Connecting Europe Facility of the European Union, RFC OEM lay down a three-year working programme.

2020 – As in all years of its existence, RFC OEM increased its sales of dedicated rail infrastructure capacity. This capacity is allocated by RFC OEM's one-stop-shop (C-OSS), and applies for all countries included in the international train path, without the need to place a request at each concerned infrastructure manager.